Another challenging project successfully completed by the Metricab Team – The replacement of an old Main LV Switchboard completed over just one weekend!!

The task was to replace the old main 2000A incoming LV Switchboard to the site.  The existing panel had started failing and it was clear that it had reached the end of its life.   Unfortunately, there was nowhere on site to relocate a new LV panel so its replacement needed to be sited in exactly the same position.

John Crane is more than just one of the world’s leading providers of engineered technology.  With more than 5,800 employees around the globe, they supply and service the products used by their customers in process industries for their mission-critical operations.  It was therefore, essential that we minimise downtime and loss of production for the Client and so we agreed to the challenge of completing the works over just one weekend.

The Client is metered at LV so it was necessary for the DNO to isolate the mains supply, meaning the whole site was without power.  The isolation was carried out on the Friday evening and Metricab’s team were on-hand and ready to start the work.  Over the next 48 hours our teams of Engineers worked day and night shifts to remove all of the cables from the old LV panel, to remove the old panel from the Switchroom in sections and to install a new Schneider Electric Smart LV Prisma panel into the LV Switchroom.  All cables were re-terminated and SSE reconnected the main incoming cable and fitted their metering CTs and the Client’s power was reinstated, with the site fully operational by Sunday afternoon in readiness for production to recommence on Monday morning as though nothing had happened!!

As always Metricab’s Engineers worked long and hard as a team to safely achieve their objective, to the Client’s complete satisfaction! 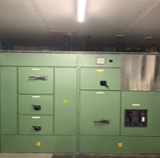 “There is lots of well deserved recognition going around for the splendid work Lee and the lads did over the weekend.  I am personally impressed with the effort and hard work that all of the team put in and also the very high standards of work they maintained.   A very good job and happy to be a reference site for you, with no hesitation in dealing with Metricab in the future”.

My sincere thanks.
Best Regards.